“The Wind Will Not Stop” New Book Launch Party

BREAKING NEWS:   Tacoma Chinese organization to host a book launch for its first published book: a Middle grade historical novel
about the expulsion of the Chinese from Tacoma in 1885. 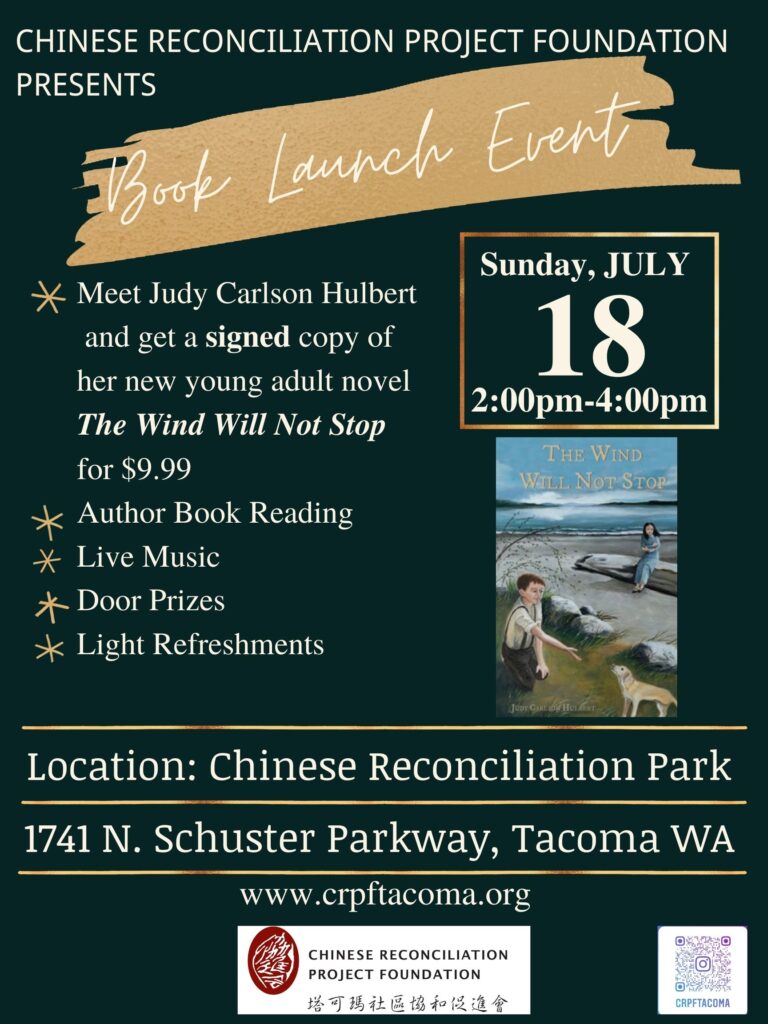 The book sets the story of a boy living in Tacoma against the backdrop of this 1885 event.  The title of the book comes from the Chinese proverb which sums up that volatile time: “The trees want to remain quiet, but the wind will not stop. (Despite wishing for peace, trouble is brewing).”

“The Wind Will Not Stop” will be sold for $9.99 at the event. Hulbert will read selections from the book and sign copies.

Live music and Chinese snacks will be provided, and door prizes will be given away.  The public is invited to come and learn about the historical event.

Hulbert got the idea for the book years before the Reconciliation Park was created.   “I grew up in Oregon, graduated from Pacific Lutheran University, and moved back to Tacoma when my husband got a job at Puget Sound University,” Hulbert said. “I was shocked that I’d never heard of this event.
I felt kids had to know about it.”

After years of researching and writing “The Wind Will Not Stop,” she approached CRPF about publishing it.  The foundation had just received
a grant from Tacoma Creates and a middle grade novel aligned with their goals of “informing and inspiring.”

Hulbert has written nine other books for children, including a biography of Harriet Tubman.  She co-founded The North End Children’s Theatre
and has written and directed plays for young people at various elementary and middle schools in Tacoma.

Why did the Chinese Reconciliation Project Foundation decide to enter into the publishing world?

“We want to tell stories that traditional publishing houses aren’t telling,” said Theresa Pan Hosley president of the Foundation. “This chapter of America’s history deserves to be told.  With this book, now students can read about the history that happened right in our own backyard.”

“Our goal is to get this book into schools and libraries across the state,” she continued.  “We’d especially like 6th graders to read it as part of
their year-long study of Washington State history.”

The Reconciliation Park was created by the city of Tacoma as a way of recognizing that event in 1885.  According to the CRPF website, the park “provides an opportunity to reflect upon the past, ponder the present, dream of the future, and celebrate our cultural diversity and common humanity.”
By bringing attention to the discrimination and persecution the Chinese faced, the foundation hopes that events like the expulsion will never happen again.